How far can you throw?

For many years Stroud was internationally known as the home of World Champions and World Records. In the 1960s the Brick and Rolling Pin Throwing competitions opened up to include Strouds in America, in Australia and in Canada.

Last year, after a few years out of the competition, we took on the Australians again. Both countries ran competitions on the same day. Our English competitors threw the longest distances in both Rolling Pins and Bricks.

Its time to start training for this years event. I am sure the Aussies won't have taken it lying down and they will be fierce opponents again this July.

Here are the basics: 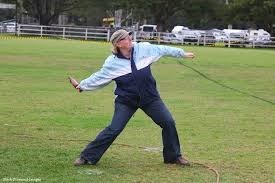 Many thanks to all who competed in this year's brick and rolling-pin throwing!

Want to try your luck next time? Look out in the Spring for the Stroud Country Show 2020 brick throwing competition.

Stalls and exhibitions will be going on all day